One of my favorite places to visit in Eastern Jordan, Qasr Usaykhim seats …

Qasr el-Al, one of three Nabatean / Roman fortifications within the visual contact …

The annexation of the Nabataean kingdom by the Roman Emperor Trajan in A.D. 106 brought yet another province, called Arabia, within the Roman Empire. To defend this new province, which essentially consisted of modern Jordan, the Sinai, and extreme southern Syria, the Romans followed their customary procedure and developed a limes, or fortified frontier, similar to others in the Empire. The limes consisted of several camps, forts, and watchtowers, which were linked together by a system of roads. 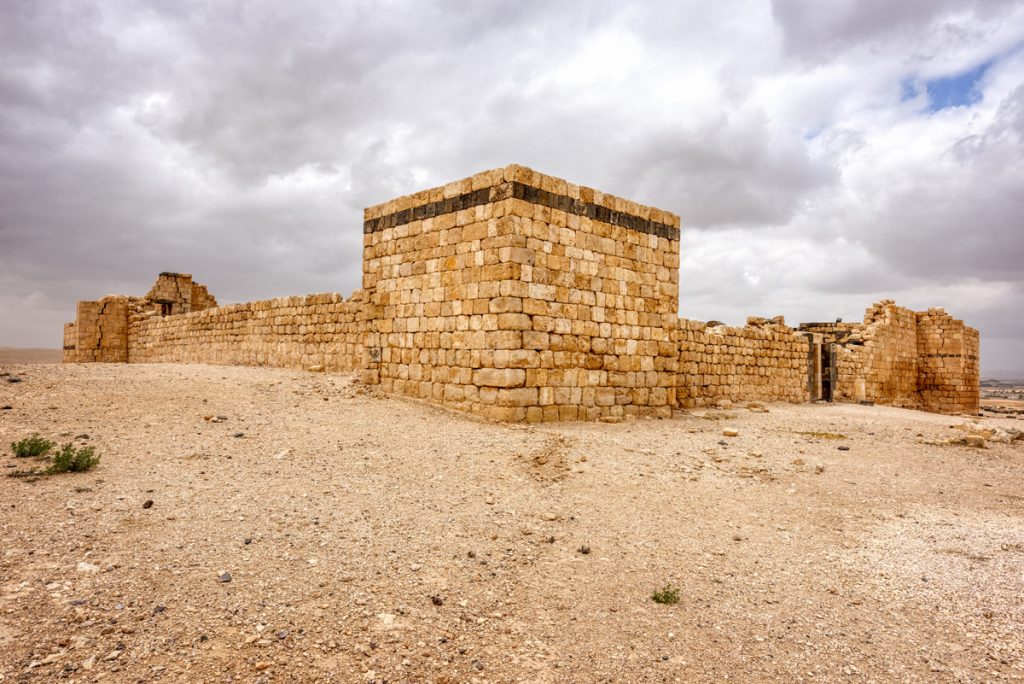 Stretching from the provincial capital of Bostra (modern Bosra in southern Syria) through Jordan to Aqaba (ancient Aila) on an arm of the Red Sea for about 1,500 kilometres at its greatest extent, the Limes Arabicus formed a part of the wider Roman limes system. It had several forts and watchtowers in Jordan including Qasr Bshir, Qasr Abu El-Kharaq, Qasr El-Al, Qasr Thuraia, Dajanya and legionary camps at El-Lejjun and Udhruh.

Next to the Limes Arabicus, Emperor Trajan built a major road, the Via Nova Traiana, from Bosra to Aila (Aqaba) on the Red Sea, a distance of 430 km. Built between 111 and 114 AD, the primary purpose of both may have been to provide efficient transportation for troop movements and government officials as well as to facilitate and protect trade caravans emerging from the Arabian Peninsula.

During the Late Roman period (135-324), the number of fort sites gradually increased. Some of the former Nabataean forts were expanded or rebuilt and several new forts were constructed, such as Qasr Al-Hallabat, Qasr Usaykhim, Deir El-Kahf, Qasr Uweinid and Qasr Azraq in the northwest region and Zona, Qasr Thuraia, Qasr Bshir, and Khirbet el Fityan in the central section of the limes. But especially important in this period was the construction of the two great camps at El-Lejjun, and at Udhruh, near Petra.

At the end of the 5th century, troops were progressively withdrawn from the Limes Arabicus and replaced with native Arab foederati, chiefly the Ghassanids. After the Muslim Arab conquest, the Limes Arabicus was largely left to disappear, though some fortifications were used and reinforced in the following centuries.

Limes Arabicus functioned effectively and with only rare failures in defending the long desert frontier for over half a millennium. Its presence secured the benefits for the Pax Romana to the inhabitants of Arabia and Palestine and security for the early spread of Christianity. Neither before nor afterwards, until modem times was Transjordan so thickly settled, was when protected by the limes. Thus the individual fort sites of the system must be preserved and protected. 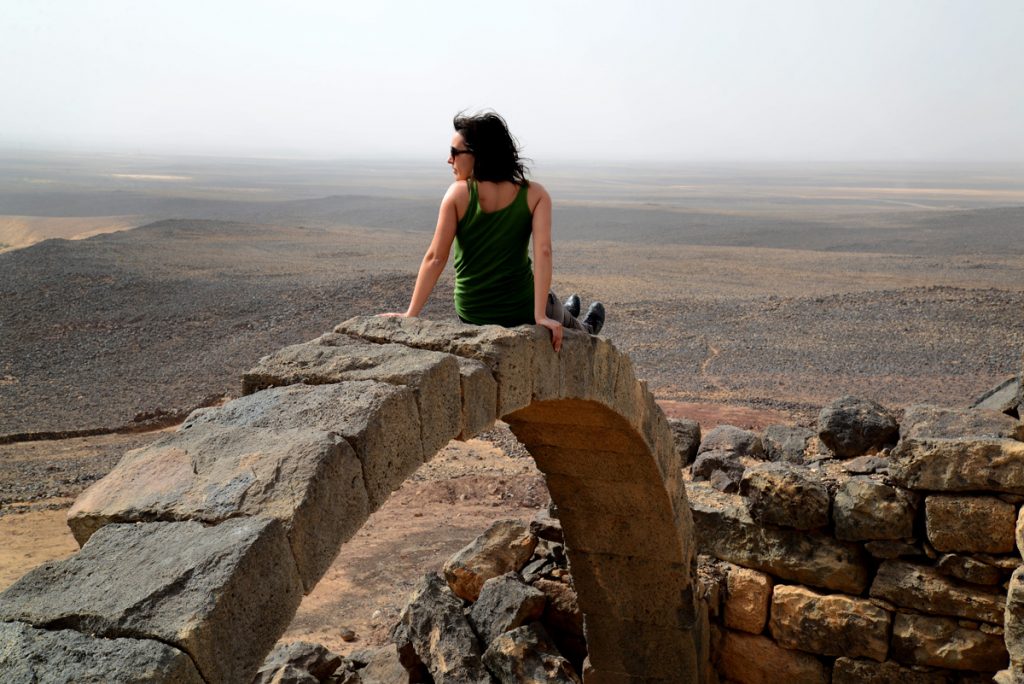 During most of the Early Roman period (63 B.C.-A.D. 135), Transjordan comprised part of the Nabataean Kingdom. To protect their borders, settlements, and caravan routes, the Nabataeans constructed a system of small forts and watchtowers, either building new structures or repairing and reoccupying many Iron Age fortifications.

Upon the Roman annexation of the Nabataean state in A.D. 106, many of these sites were simply incorporated into the newly emerging limes system. The takeover of these Nabataean fortifications probably provided the initial framework of the Limes Arabicus. In the northern portion of Transjordan, the attested absence of Nabataean pottery makes this transition more difficult to observe but the presence of Early Roman pottery from such sites as Deir El-Kahf and Qasr Al-Hallabat may indicate the possibility of earlier Nabataean forts and garrisons.

In addition, the Romans built a few new forts at the time of the annexation such as Qasr El-Kithara in the extreme south. A great amount of attention was devoted to the construction of the main north-south road, or via nova, which ran from the provincial capital of Bostra south of’ Aqaba (Aila) and was completed in A.D. 111.

During the Late Roman period (135-284), the number of fort sites gradually increased. Some of the former Nabataean forts were expanded or rebuilt and several new forts were constructed, such as the important fort of Dajanya, Al-Hallabat, and Qasr Usaykhim. It seems that no particular area was emphasized, but that the entire frontier received attention. Although the second century was a period of general peace and stability throughout the Roman Empire, the third century witnessed civil wars, foreign invasions, and considerable anarchy. In the later third century came the meteoric rise of Palmyra in Syria. Palmyrene armies reached as far as Egypt and must have severely disrupted the Roman army of Arabia as well as the armies of the other eastern provinces. After the defeat and destruction of Palmyra by Emperor Aurelian (270-275), the Romans were faced with the task of reorganization and reconstruction.

This challenge was met by Emperor Diocletian (284-324) with particular attention paid to the northwestern region. Qasr Azraq joined Qasr Uweinid and Qasr Usaykhim to form a line to control access out of the Sirhan. Several important forts in the central sector of the limes were constructed, such as Zona, Qasr Thuraia, Qasr Bshir, and Khirbet el Fityan. But especially important in this period was the construction of the two great camps at El-Lejjun, and at Udhruh, near Petra.

Throughout the 4th century, the number of occupied limes sites remained at this high level and started to decline in the Early Byzantine period (392-450). Most of the forts were abandoned by the end of the 5th century. This process of gradual evacuation of the military posts in Arabia may be partially due to the turnover of much of the area to the Ghassanids, who were local vassals of the Byzantines.

The small military Roman Fort of Uweinid lies on the tip of a law basalt spur 15 km southwest of Qasr Azraq and overlooking the Wadi Butm which bends around it,…
Travel Guides

One of my favourite places to visit in Eastern Jordan, Qasr Usaykhim seats on the top of the hill just 22 km north of Azraq on Azraq to Safawi road towards the …
Travel Guides

Qasr el-Al, one of three Nabatean / Roman fortifications within the visual contact between them, is situated just 4km north of Qasr Bshir and like Qasr Abu el-K…
Travel Guides

Qasr Bshir (Castra Praetorii Mobeni), one of the best-preserved Roman forts in the Middle East, belongs to the chain of forts and watchtowers known as the Limes…