The only Desert Castle that still lives up to its billing as a vast, carefully crafted, remote …

Qasr Azraq is often included on day trips from Amman to the Desert Castles, along with Qasr Kharana …

Some 20 km from Amman en route to Qasr Kharana and Qasr Amra, the large reservoir at Al-Muwaqqar …

The only Desert Castle that still lives up to its billing as a vast, carefully crafted, remote, fortified palace is …

One of the most magnificent and at the same time difficult to reach sites, Burqu Islamic Palace lies …

Qasr Al-Hallabat, 30 km from Zarka and 60 km from Amman, is perhaps one of the most representative …

Situated 2 km to the west of Qasr Al-Hallabat, Hammam As-Sarah is a bath complex that was …

60 kilometres East of Amman on highway 40 in an arid part of the Syrian-Jordanian desert, Qasr Kharana …

Although this rather large Umayyad settlement was once a grand city in the desert, today Mshash …

Qasr Al-Mushatta (Winter Palace), the largest and most ambitious of the Umayyad palaces in Jordan …

Stretching east from Amman is a desert region bewildering in its size and ruthless climate, a place …

GUIDE TO UMAYYAD PALACES IN THE EASTERN DESERT

Some of Jordan’s most enigmatic sights, the famed Desert Castles are scattered among the gravel of the Eastern Desert, and stand as a testament to the early flourishing of Islamic civilization. These complexes are too extensive to be referred simply to as “castles” or “palaces”. A number of them can more accurately be described as estates or small settlements that contained residential quarters, a mosque, a bath complex and the infrastructure necessary for agricultural activities. Some also functioned as caravan stations and trading posts. 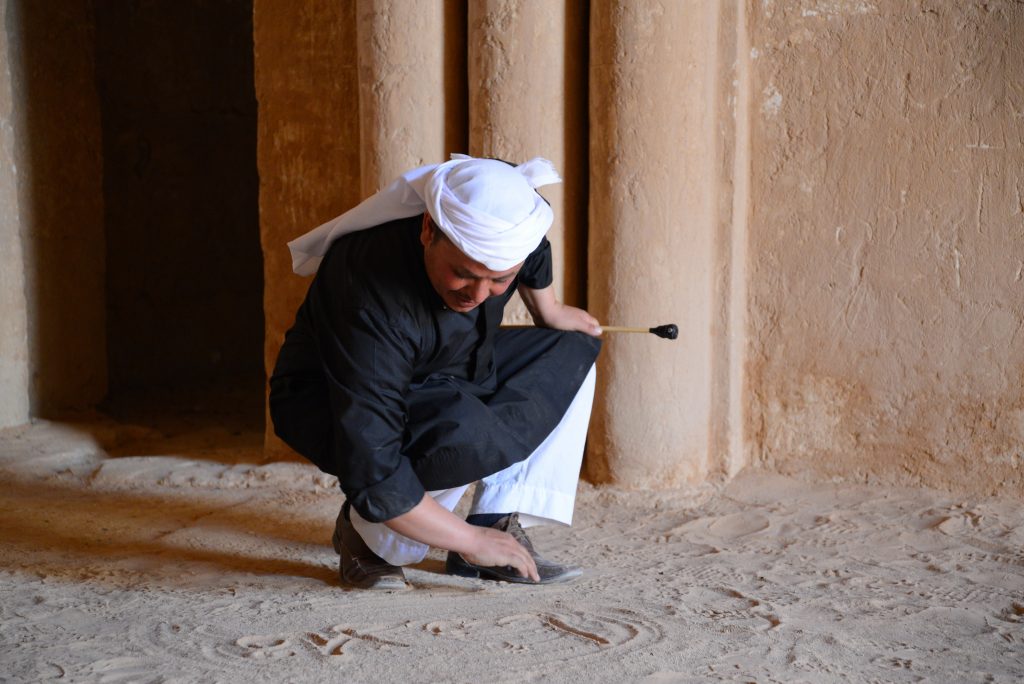 Umayyad architecture developed in the Umayyad Caliphate between 661 and 750, primarily in its heartlands of Syria, Jordan and Palestine. It drew extensively on the architecture of the defeated Byzantine and Sasanid empires but introduced innovations in decoration and new types of building such as mosques with mihrabs and minarets. The Jordan’s Desert Castles are no exception but northerlies remain of great historical importance.

These complexes are among the earliest known examples of Islamic architecture, and also the earliest examples of secular, and more specifically, palatial architecture from the Islamic world. They provide one of the few examples in ancient and medieval architecture where a significant number of historical buildings of the same period, the same geographic area and the same building type are still extant. In addition to being important material evidence of princely life in the early Islamic period, they also provide continuity with the Roman country villa that survived into late antiquity, and, therefore, can shed some light on this building type.

Umayyad architecture is distinguished by the extent and variety of decoration, including mosaics, wall paintings, sculptures and carved reliefs with Islamic motifs. Most buildings were of high-quality ashlar masonry, using large tightly-joined blocks, sometimes with carving on the facade. Stone barrel vaults were only used to roof small spans. Wooden roofs were used for larger spans, with the wood brought from the forests of Lebanon.

The Desert Castles that most visitors see are Qasr Al-Hallabat, Hammam As-Sarah, Qasr Azraq, Qasr Amra and Qasr Kharana. They are easily accessible and can be visited from Amman with a day tour. Some remote castles require 4WD and more time to reach but they won’t disappoint. Among them are Qasr Tuba and Qasr Burqu (two of my favourite castles). Qasr Al-Qastal and Qasr Al-Mushatta are conveniently located near the airport, some 25 km from Amman.

These complexes were symbolically defended by walls, towers and gates with outside walls carrying decorative friezes. They would have a bathhouse, a mosque, and the main castle. Towers along the walls would often hold apartments with three or five rooms. These rooms were simple, indicating they were little more than places to sleep. The castles often had a second-floor holding formal meeting rooms and official apartments.

Their fortress-like appearances were misleading. Thus Qasr Kharana appears to have arrow slits, but these were purely decorative. The fortress-like plan was derived from Roman forts built in Syria, and construction mostly followed earlier Syrian methods with some Byzantine and Mesopotamian elements. The baths derive from Roman models but had smaller heated rooms and larger ornate rooms that would presumably have been used for entertainment.

The castles had floor mosaics and frescoes or paintings on the walls, with designs that show both eastern and western influences. One fresco in the bath of Qasr Amra depicts six kings. Inscriptions below in Arabic and Greek identify the first four as the rulers of Byzantium, Spain, Persia and Abyssinia.

The Desert Castles represent some of the most impressive examples of early Islamic art and Islamic architecture and are notable for including many figurative frescos and reliefs and people and animals, less frequently found in later Islamic art on such a large and public scale. 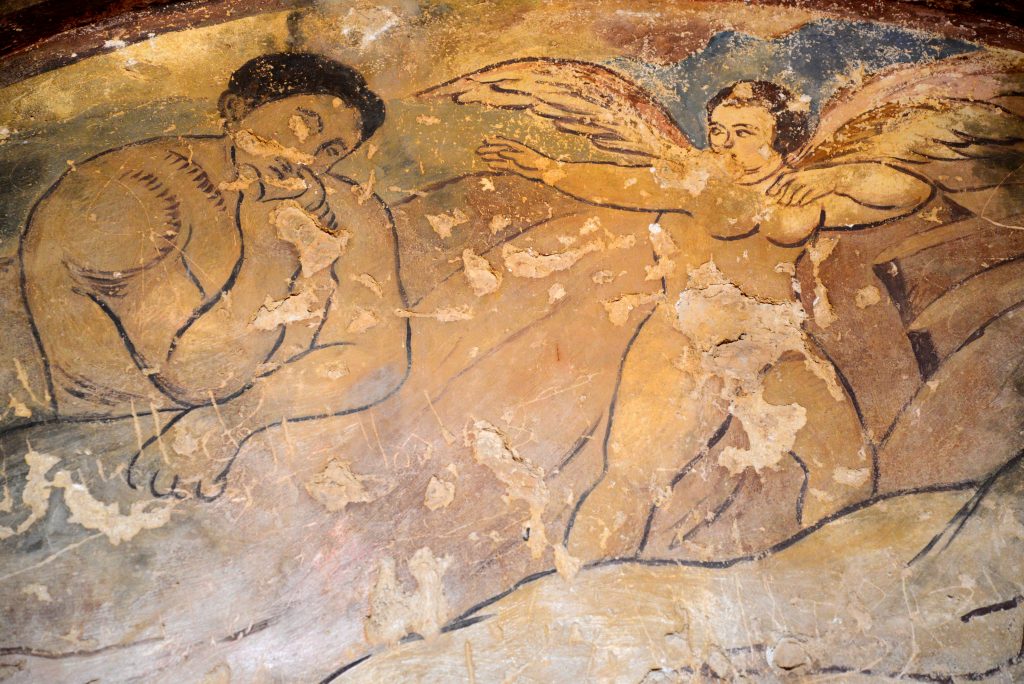 The Umayyads (661 – 750 AD) were the first Islamic dynasty. On Muhammad’s death a leader, the Caliph, had been chosen by a council. This custom continued for a while until a power struggle broke out with the appointment of Caliph Uthman and subsequently worsened under his successor, the Prophet’s son-in-law, Ali. After his victory in the ensuing civil war, the first Umayyad ruler Muawiya moved the capital north to Damascus where he had been governor, shifting power from the Hijaz northwards.

The Umayyads presided over a tremendous expansion of the Muslim world: to North Africa, Spain and Central Asia. It was a time of dynamic development, but it also saw the beginnings of dissent and schism within Islam – the Shiite movement developed after the death of the Prophet’s son-in-law Ali in 661 and his son Hussein in 680. Ultimately this conflict and tribal feuding were to lead to the downfall of the Umayyad house, but in the 90 years of Umayyad rule their achievements were considerable: they forged a new Islamic administration capable of running an empire that by then stretched from India to Morocco.

Aesthetically they stood for a fusion of styles from which a truly Islamic art was forged. In Syria, the Arabs entered a region with its own artistic and cultural heritage and were influenced both by Persian and Eastern Mediterranean art and iconography. Hence the importance of the Umayyad monuments found in Jordan, Syria and Palestine: buildings like the Dome of the Rock in Jerusalem, or the Great Mosque in Damascus paved the way for the later developments in Islamic art.

On a more personal level there are the “Desert Castles”, expressions of a more private side of their lives, but which stand today as prime examples of early, secular, Islamic art. Showing great variety in their construction and functions (the Amra baths, enigmatic Kharana, the splendid but unfinished palace of Mshatta) one of their hallmarks was a wealth of decoration: mosaic, fresco, stone or stucco carvings, depicting events, people animals and sometimes just pure pattern.

These complexes, often called castles, are located at the edge of the desert and have aroused much speculation among scholars, who first saw them as retreats for the Umayyad rulers. Certainly, they may have been built there to maintain a close relationship with the tribes whose support the Umayyads needed, but there are other explanations: some were on well-used trade routes and may have served transient visitors, and some may have had a defensive or agricultural purpose, while yet others were there purely for pleasure and as an escape from the city for a dynasty with those links to the Bedouin and desert life.

It became increasingly difficult for the Umayyads to hold their empire together, weakened as it was with feuding and religious dissent. The Shiite movement was gaining support from disaffected converts to Islam, disgruntled at tax burdens and perceived discrimination. A further shift in the centre of power was heralded by the ascendancy of the Abbasid dynasty east of Baghdad.

The last of the Umayyads, Marwan II, was killed in Egypt and his head was sent back to the man who had by then been proclaimed Caliph, Abul Abbas, a descendant of a relation of the Prophet. A branch of Umayyads hung on in Spain until the 11C, but Syria and Jordan were never again to be so close to the centre of power. Nonetheless, the monuments of the Umayyads still stand in the desert as reminders of the early days and achievements of Islam.

60 kilometres East of Amman on highway 40 in an arid part of the Syrian-Jordanian desert, Qasr Kharana welcomes tourists as one of the Desert Castles in this re…
Travel Guides

Originally established as an Umayyad settlement in the 8th century by Caliph Abd al-Malik ibn Marwan, known mainly for building the magnificent Dome of the Rock…
Travel Guides

Stretching east from Amman is a desert region bewildering in its size and ruthless climate, a place of sand and barren basalt landscapes which bear witness to a…
Travel Guides

Qasr Al-Mushatta (Winter Palace), the largest and most ambitious of the Umayyad palaces in Jordan, sits some 30 km south of the capital Amman and just north of …
Travel Guides

Go back in time to the era of military campaigns and desert warfare as you explore Jordan’s imposing Desert Castles, many dating back to the first half of the 8…
Travel Guides

Although this rather large Umayyad settlement was once a grand city in the desert, today Mshash sadly lies in virtual ruin. Standing on the very edge of the Wad…
Travel Guides

Situated 2 km to the west of Qasr Al-Hallabat  Hammam As-Sarah is a bath complex that was used by visitors to Al-Hallabat. Smaller than the Amra baths the attra…
Travel Guides

Qasr Al-Hallabat, 30 km from Zarka and 60 km from Amman, is perhaps one of the most representative and important sites in the Near East to understand the socio-…
Travel Guides

One of the most magnificent and at the same time difficult to reach sites, Qasr Burqu lies in the middle of the Eastern Desert by the lake in the far-east part …
Travel Guides

The only Desert Castle that still lives up to its billing as a vast, carefully crafted, remote, fortified palace is Qasr Tuba, which can only be reached with a …
Travel Guides

Some 20 km from Amman en route to Qasr Kharana and Qasr Amra, the large reservoir at Al-Muwaqqar lies just south of Hwy 40 and is still in use. It probably serv…
Travel Guides

Qasr Azraq is often included on day trips from Amman to the Desert Castles, along with Qasr Kharana and Qasr Amra, both east of the capital and reached via High…